The browser version moved to https://buildncrush.com/

This is a multiplayer game where you can build stuff, blow it up, share it with the other players and crush what others created!

You can build various stuff from blocks. Don't forget to save your creation once it's done. With a single click on the "Make it public" button, you will make your creation available to other players!

Use various weapons (TNT, cannon, earthquake, etc) to crush different stuff. Want to do it again? Just restart the entire stuff. The "Crush random" button will help you fastly experience new creations without having to visit the main menu.

Also join our Discord server if you enjoy the game https://discord.gg/m4u7GmX

* Crushing something doesn't mean you are destroying it permanently. It will still be intact for its creator or the other players that want to crush it.

Why do you think it died? Thousands of people are playing it daily, and the number is constantly increasing :)

i meant the comments, there hasnt been a comment for almost a month

Yep, all the party moved to Discord :) So that's why I haven't been posting here in a while.

On discord most of comments are "Hi" and random pictures

This is like web minecraft and since i am a poor child that cant afford such things, i honestly think that this is great.

Dude, my build already has a few hundred plays after just a few days!

So fun! I loved playing this awesome game! I really enjoyed this! Thank you for all of your hard work. Thanks!

Thank you too for playing my game! And stay tuned, cause FPS mode will appear soon!

Amazing! I especially like the blowing up, destroying, knocking over, shaking, eliminating, obliterating, liquidating, annihilating, exterminating and wrecking!

With building maybe you could do a click and drag way so its faster?

Paint Mode does exactly this :)

Here is my playthrough

Hi there, I am a youtuber and hope to get some support from you guys by leaving a like and subscribe at my channel.

To be honest, (I apologise for my harshness) I felt that the game is not very original. It is like a combination of minecraft and Garry's mod or with other games. The game is unattractive to me because of its resemblance to other games. I hope that a more original and creative idea and game can be created instead of building like in minecraft and destroying it with various different modern day equipment like Garry's mod or mods in minecraft.

I will continue looking forward to what the creator of the game will put up in the future and I hope that you understand what I am saying. I sincerely apologise for my harshness once more but this are my opinions towards your game. Thank you.

Thank you for the video! Yes, I totally understand your opinion. However, I plan to continuously add new features, like minigames or different multiplayer mods (all focused on destruction). So in the end, I hope the game will be more appealing :)

Great then! I will be looking forward to the game then. :)

Reply
Build and Crush2 years ago(+1)

Reply
Build and Crush2 years ago(+1)

That's an issue that I'd also like to solve, but can't due to performance reasons.

Right now, the blocks are fixed, and the CPU doesn't have to compute a lot of physics. For the blocks to fall freely when you crush something under them, all the blocks should be active physics objects (Rigidbodies, in Unity's terms :) ). And this will require a lot of physics calculations that will slow the game very much.

You can open a creation with a lot of blocks, and make an earthquake there. Because the earthquake makes all the blocks physics objects. And you can see that infernal lag this is causing :)

I'll try to find a solution to implement your idea, because it will be cool indeed :)

can we please go under the map, it ruined my underground bunker not being able to do that anymore! :(

Wow, you are still playing the game! That's a great pleasure to find out people return to it :) Yeah, screw the underground block, I removed it and even made it dark underground, so now the bunker is playable again :)

Glad to hear this, and can't wait to see the school!

Hi, sorry to dissapoint you, but I had to reintroduce the underground blocking :D

The reason for this is that it did not play well with the new "Total Crush" effect when completly destroying a creation, and also with the new crushed blocks bar.

Hey, thank you for your feedback! Yep indeed, the rocket controls are a little bit dumb indeed, I'll fix them.

I really like your game. It's satisfying to destroy building. Great idea.

Reply
Build and Crush2 years ago(+2)

Thank you! Really glad you liked it :) 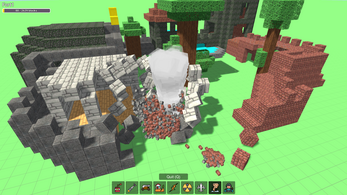 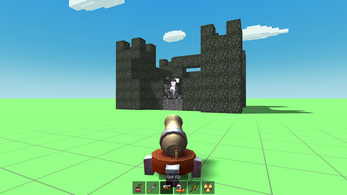 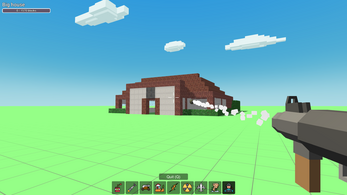 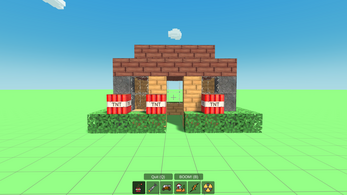 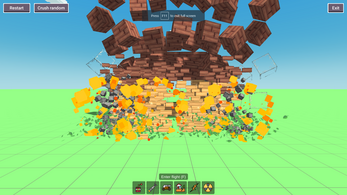 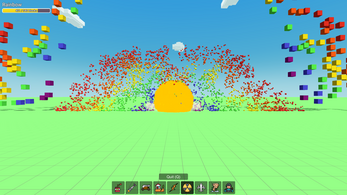 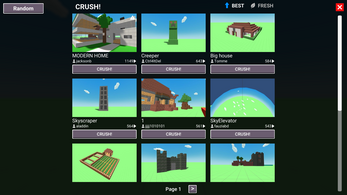